The four most common types of belt joints, and what they mean for you. 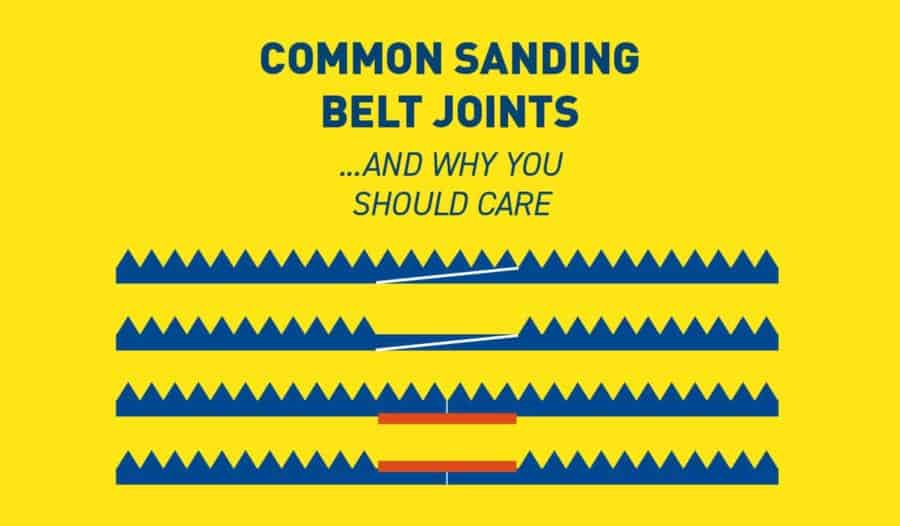 When it comes to choosing the right coated abrasives products for your operation, there are many technical variables to consider, such as: grain type, grit sequence needed for optimal removal rate and efficient sanding, belt backing material, open or closed coat, stearated or not, material being sanded, how many and what types of sanding heads are available in your wide belt sander, amongst many other variables. While these are all certainly key aspects to consider in making your product selections, another important element to understand is the type of joint on your sanding belt.

In this article we’ll go over the 4 main types of joints Uneeda produces, why you might want one over another.

Before we go through the different types of joints on a sanding belt, let’s discuss a bit about what a sanding belt is and how it is produced.

This might be pretty basic for those of you out there already in the market for a sanding belt, but a sanding belt is a type of coated abrasive product made of either a paper or cloth (sometimes film) backing with abrasive grains attached. The format of the belt is that a large or small strip/piece of the material is cut to a specific size and then the ends are brought together to form a loop. As you might expect, the joint is the point at which the two ends meet and are attached.

On the sanding belt, the joint can be made in a variety of ways, each with its own advantages and disadvantages depending on the application, and each will affect the sanding process and results in different ways.

Why The Joint Matters

The reason it’s important to consider the style of joint on your sanding belts is because, no matter how well the belt is made, the joint can sometimes contribute to issues in the sanding process, namely: chatter, loading, tracking, belt breakage and overall abrasive performance. (To learn more about these issues and identify other possible causes/solutions about them, check out our other articles: Chatter, Loading, Tracking)  In addition, when choosing the belt joint type that’s right for you, it’s important to consider what materials you’ll primarily be sanding, whether you prefer to have a single or bi-directional belt, and the type of sander/hardness of the drum or platen the belt will be run on. Some of these aspects are more prone to influence the likelihood for chatter, loading and shortening the life of the belt.

Chatter is the most common and likely most irritating issue in wide belt sanding. We have a few other articles discussing it in greater detail, but for the purposes of this article, chatter is a visible marking on the work piece consisting of parallel lines going along the width of the work piece, and will span the whole length  of the work piece, from start to finish. When caused by the joint, the lines will be an even distance apart, approximately ¼ inch , whereas, when caused by the machine, they will be much closer to one another. To test whether it is the joint or a machine issue, change your feed speed to see whether the distance between the chatter lines changes. If the distance changes, it may be the joint, if not, it is likely a problem in the machine.

When chatter is caused by a belt, this occurs because the joint is not even – such as if the tape used was too thick compared to the belt itself, or from the belt loading too much in the joint. Additionally, if you’ll be sanding with a metal drum, choosing a belt that minimizes chatter will be key.

When sanding softer woods like Pine and Poplar, they have a tendency to load easier – and the first place they’ll start to load is the crease in the joint. So, if you’re sanding these types of materials, it will be important to compensate for this by using a joint that is designed to minimize loading, such as the top-skived varieties.

When experiencing tracking issues, sometimes taking the belt off and running it in the opposite direction solves the issue. If this capability is important to you, it’ll be important to select a joint style that is bi-directional.

We’ve all heard the adage that a chain is only as strong as its weakest link. The same is true for a sanding belt. No matter how well a belt is made, the joint will naturally be the most vulnerable point. Choosing a joint that can only be run in a single direction can contribute to the possibility for belt breakage if the belt is run accidentally or intentionally in the wrong direction. Choosing a bi-directional joint will be important if you’re concerned about operator error causing belts to break.

Now that we understand a bit about sanding belts and the impact of the joint, let’s discuss the types. At Uneeda, the main types of joints we produce are the Overlapped Joint (Lap Joint); the Top-Skived, Overlapped Joint; Butt Joint (also known as a Tape Joint); and the Fully Top-Skived Grain Side, Tape on Top Butt Joint. Each of these options is used in different circumstances and for different reasons.

The overlapped (lap) joint is formed by cutting the belt on a diagonal angle, without removing any grain from the top. This way, when the two sides are brought together, the side with the remaining grain is put on top of the other side and there is a continuous coating of grains, without a break. The two ends are then attached using a thin layer of glue/adhesive.

These lap joints are more commonly used on paper belts, and while this type of joint can be good for use on soft contact wheels or pump sleeves and offers good protection against wear, these belts can only be run in one direction. While some claim that lap joint belts could be reversible, you run the risk of belts snapping when being run in the opposite direction. An arrow printed on the inside of the belt indicates the direction to run the belt.

The top-skived, overlapping joint is quite similar to the normal overlapping joint, being formed in a similar way – by putting one side over the other and using adhesive to hold them together. The difference, however, is that grain has been removed (skived), forming a gap in the grain over the top of the joint.

This type of joint is good in applications where there may be more risk for loading, and therefore chatter, and where minimum joint thickness is needed, such as in mold or edge sanding or finer grits.

The most common type of joint Uneeda produces is the tape joint, or butt joint, as it is frequently used on both cloth and paper belts. Unlike the lap joints, the two edges of the belt are brought together along their natural, blunt edges and attached using thin tape along the entire length of the belt on the back (non-grain) side. To maximize the security of the joint, the tape’s width is 19mm. Because the joint is made at the natural edges of the material, there is a continuous layer of grains across the joint. In the production process, the backing of the belt goes through a process of scuffing and/or skiving, creating a channel in which to lay the tape and produce a close to zero tolerance joint.

While typically this style of joint is formed in a straight line, the edges can also be cut into a sine wave design, so the two sides fit together in an interlocking pattern. The wave form is more prevalent in glass sanding, whereas the straight line is much more common overall.

Historically, lap joints were much more popular than tape joints, since tape was too thick and caused chatter. However, with advances in technology, there are now very thin tapes produced that can form a zero tolerance joint. Different thicknesses of tape will be used for different grits and different depths of paper and cloth backing.

A key benefit of tape joints is that they are bi-directional, unlike lap joints. Using bi-directional belts can minimize human error on belt installation, minimize tracking issues and extend the life of the belt.

For the above reasons, as well as because it can be used on both cloth and paper belts, tape joints are typically recommended to begin with.

In addition to the standard butt joint with tape on the bottom, Uneeda also offers another type of tape joint. In this version, the grains are removed (skived) surrounding the joint, the edges are butted against each other and the tape is then placed on the grain side of the belt. This method creates a tape joint with a zero tolerance on the back (interior of the belt). This is used only for cloth belts and is not suitable for paper.

This joint is used frequently in the flooring industry, as well as to reduce chatter on metal drums, where there is no cushion. This type of joint is also useful in applications where loading is a problem, as the the joint will prevent loading, since there is no grain and the dust will be less prone to stick to the tape.     This joint is also used on narrow, J flex belts to help eliminate chatter while giving the flexibility of having a universal direction belt for mold sanding applications. 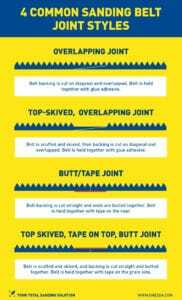 Selecting the ideal sanding belt for your application can be a complicated process. One important thing to consider is the style of belt joint. The four main types Uneeda offers are the traditional lap joint, a top-skived lap joint, a traditional butt/tape joint with tape on the back, and a fully top-skived tape joint with tape on the grain side. Each of these is used for different reasons, however the most common is the tape joint, as it allows for the belt to be run in both directions, as well as it can be used on both paper and cloth belts and minimizes both chatter and loading issues. However, in certain applications, it may still be better to choose another joint style.

For assistance in making your selections, contact your Uneeda sales engineer. If you’re not yet a Uneeda customer, contact sales@uneeda.com to be matched with a rep.

Grit Sequence: Let (gr)it do the hard work for you.

Why and How to Properly “Ground” Your Wide Belt Sander

Show
More
Email
Us!
Email Us!
Thanks for your interest in Uneeda. Complete the form below to contact us with your questions
845-426-2800
Follow us on